Herbert Hoover, 31st President of the United States once said " Children are our most valuable resource." A resource is a place you go where something is accumulated and can be drawn from when needed. The growth and sustainability of a resource depends on good stewardship.  Giving to what is already there and not just taking!


John W. Whitehead, founder of Rutherford said this " Children are the living messages we send to a time we will not see." How we care for the worlds children of today will determine the world of tomorrow! Help us care for our great resource in Kenya. 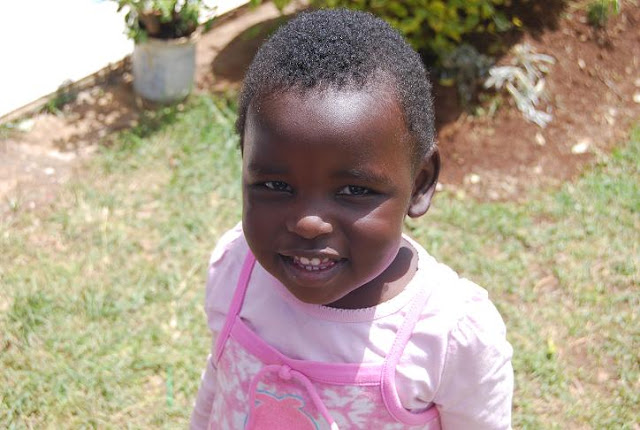 This is Ruth.
She is 3 years old.  Ruth came to be part of our family in 2009, she was 6 months old.  Ruth's family was caught up in the political clashes of 2007-2008.  They lost their home and had to live at the DPC ( Displaced Persons Camp ).  While living there for over 2 years in a tarp tent, Ruth's mother gave birth to her and then subsequently died when she was 6 months old.  Ruth was then given into the custody of her elderly Grandmother, who had to give her up along with Ruth's 3 siblings and 6 other juvenile cousins. All were placed in separate children's homes.  Ruth is a stout girl, her physical appearance speaks of her personality.  It is all or nothing with Ruth.  She is either laughing uproariously or screaming at the top of her lungs because she did not get her way.  Ruth is a mother through and through, she loves her dolls faithfully and all her brothers and sisters too.  We are so blessed by our powerhouse daughter Ruth! 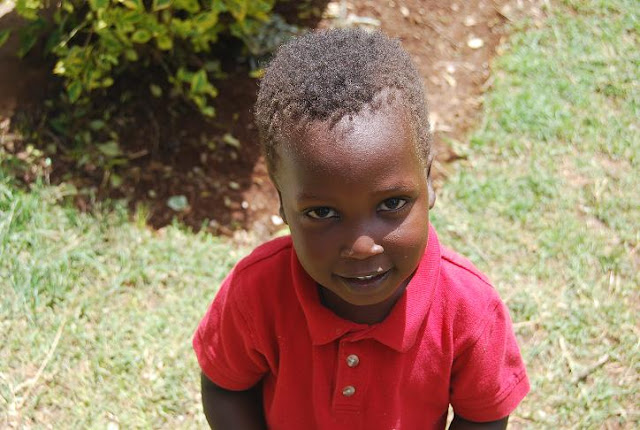 Titus he is 3 years old.  Titus came to be part of our family in 2010.  Titus was abandoned in his neighborhood.  He was sat outside the house where him and his parents had once live.  Sitting beside the trash his parents had cleared from the house and left at the curb.  After several days he had not moved and one of the neighbors decided the parents were not going to come back and pick him up so they took him to he police station.  Titus was 17 months old at the time.  He came to live with us a few weeks later and did not make a sound for several weeks.  Loud noises made him jump and he did not want anyone to touch him.  Look at this face, as soon as he found out how much he was loved, he never wanted to be put down. He has been our cuddle bug ever since!  It seems hard to describe how much this little guy means to all of us!  Praise God for the love He puts in our hearts, it is so big! 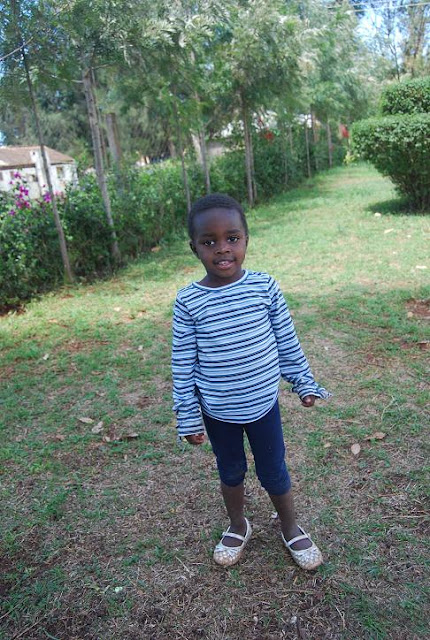 Phoebe is 3 years old and came to be part of our family in 2010.  Phoebe was abandoned outside in a field. A person walking by saw her sitting in the grasses.  She was taken to the hospital.  We got her a few months later when she was stronger but still not able to walk she was 13 months old when we met her.  She was still very malnutrition and weak.  She had such a pitiful squeaky cry!  She is another on that as soon as she was assured of love, never wanted to be let go.  Phoebe loves to be held and cuddled like a baby. When ever she is in distress over anything she must be held, a casual pat or hug will not do, she must be folded into our arms and showed how very much she is loved!  You would not even recognize the little girl we received
over 2 years ago.  Phoebe is in our preschool and does so well.  She is much more sure of herself and steps out to do things on her own. We praise God for his mighty work in our daughter Phoebe. 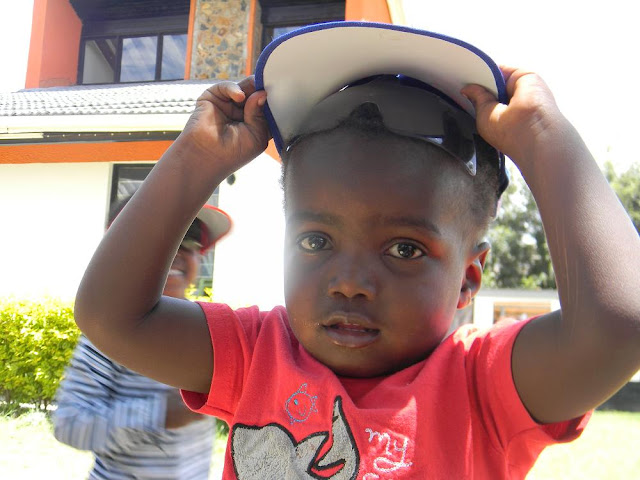 Matthew is 3 years old and has been part of our family since 2010.  Matthew was abandoned at the hospital.  Matthew was diagnosed with autism because he would not communicate with anyone after being rescued.  He would only roll himself back and forth to comfort himself.  If you touched him, he would scream out as if in pain.  His eyes would look at you but when you made complete eye contact he would just shiver and have so much fear in his eyes, it made us want to cry.  Matthew was guessed to be around 17 months old when we received him but he did not walk, or crawl or sit up by himself.  Before Matthews 2nd birthday hes was not only walking but running and laughing and playing with all his new brothers and sisters.  God's love creates an atmosphere that enables so much of the miraculous, it is much bigger then even autisum, Praise God.  We are so oftened humbled by how much is done by His presence!  Praise God for all that the he has done to heal Matthews heart and mind.

Thank you all that have responded to the opportunity to sponsor one of our children here at Tumaini Children's Home, Eldoret Kenya.  We want to continue to encourage you to share this site with all those you might think would want to help in this ministry.  A complete sponsorship is $150 per month per child, this takes care of all the child's personal needs ( food, clothing, shoes, medical, dental, education,caregivers...) but does not pay for all it take to operate this ministry. Each child can have several Sponsors to complete a sponsorship so it could take many to make this work as God would purpose.  We we hope you will listen  Please visit our website  www.tchkenya.com for all the information on how you set up a sponsorship account. You can also go straight from our website to our fb page and see more pictures and video.  This ministry is run and supported solely on donation and prayer we hope you will want to be apart of what God is doing here in Kenya and if you already are, we thank you and appreciate you so much!
It is God's promise to us all that join Him in giving out of what He has given to us, to be Blessed beyond what we can imagine!  That is what our prayer is for everyone who joins us in this ministry of pouring out the Father's love to the fatherless!
In the Father's Mighty Love Horace & Phyllis Leister

A Word from the Girls! 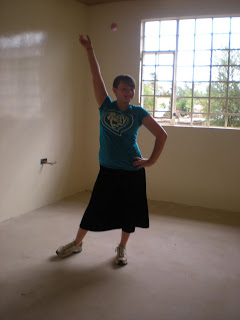 Habari, From Troy This is me in my future room! Is'nt it beautiful? It's a big room but I'm not going to have the room all to myself Iam going to share it with Dannon which is alright with me because it is a rather large room. Here is Sarah and I with our bunny ears on. Sarah is so adorable, isn't she? We each got a pair of bunny ears or flower crown for Easter, from a friend in Colorado. All of the girls like to dress up with them and it is so cute. This bug was in the little girls room. Sarah pointed at it and said "dudu" that means "bug" in kiswahili. It was some kind of large beattle. I took it outside and let it go. I wanted to keep it for a pet but I knew how Mom would feel about this, not Ok! I went to Josh and Rachels house in Kisumu with Mom,Dad,Three babies and Dannon. It takes two and a half hours to get to kisumu. I had so much fun going there. This is me and Gabe at a restaurant in Kisumu. Gabe was being so funny whe
Read more 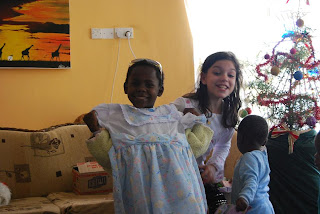 What a month it has been! I kept thinking that we could not get any busier but we did! We came to a agreement with Nancy & Maggie's mother that felt like God's hand! She and only she will visit with them here once a month. They are now permanently part of Tumaini Childrens Center. Then we received our 8th & 9th child Joyce & Dema, we have a full house. Our #1 farmer rang us and ask for help, his wife just had a baby! We did not know that they were expecting. Some cultures here keep the wife inside and do not tell anyone until the blessed event! We guess this is what took place so Horace was out and helping right away! On the 12th of December we were so pleased to meet our newest grandson, Tekoa Jeshi Leister! Born here in Eldoret Kenya! Praise God He is so good to us! Tekoa's birth was a bit more than his parents expected so we have been doubly blessed to have Josh, Rachel & Tekoa for an extra 2 weeks,through the Holidays, yea!!!! We were also b
Read more